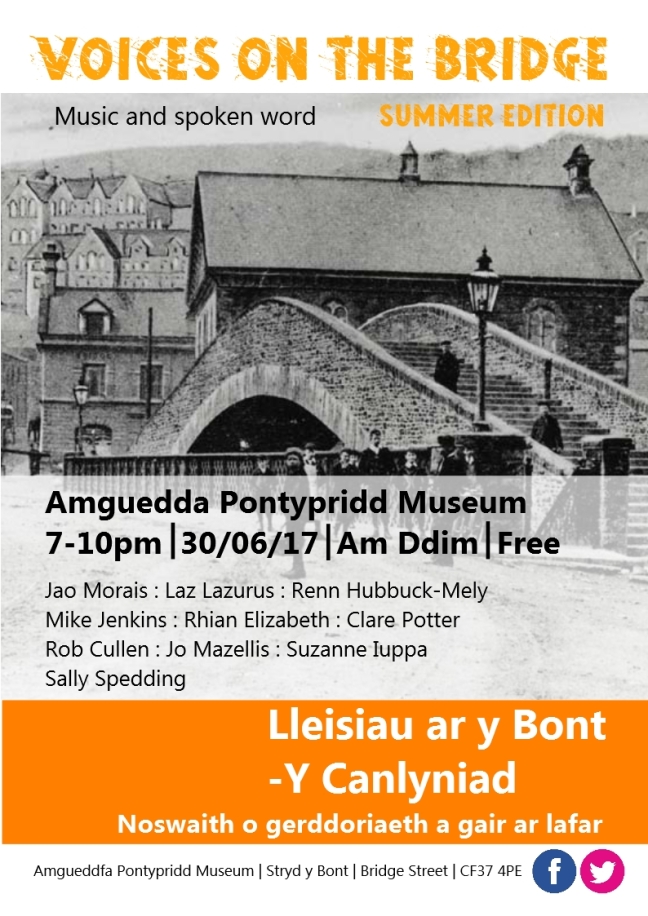 Rhian Elizabeth was born in 1988 in the Rhondda Valley. Her first novel, Six Pounds Eight Ounces (Seren, 2014), was set in that valley and shortlisted for The International Rubery Book Award. In 2016 she was a winner of The Terry Hetherington Young Writers Award. Right now she is working on a collection of poems entitled ‘the last polar bear on earth’- poems all about being sick and being in love.

Renn Hubbuck-Melly is an artist and performer. Renn uses her practice to explore our relationship to the body, sexuality and gender, making work about her own experiences as well as listening to other people’s stories. She is particularly interested in how this area is expressed in the present day and how nature, culture and technology come together to influence and determine the way humans interact and connect with each other.”

Jo Mazelis is an award winning novelist, short story writer, poet and photographer who was born in Swansea, where she currently lives. Her first book Diving Girls was shortlisted for Commonwealth Best First Book. Her stories have appeared in many publications and several have been broadcast on Radio Four. Her debut novel Significance won The Jerwood Fiction Uncovered Prize, 2015. Her latest book Ritual, 1969 was long-listed for The Edge Hill Award.

Joao Morais lives in Cardiff. He is about to complete a PhD in Creative Writing at Cardiff University. This year he has been longlisted for the New Welsh Writing Awards Americymru Prize for the Novella. He has previously been shortlisted for the Academi Rhys Davies Short Story Prize, the Percy French Prize for Comic Verse, and the All Wales Comic Verse Award. He won the 2013 Terry Hetherington Prize for Young Writers. He has a short story collection due out next year with Parthian.

Rob Cullen studied at Bristol and Cardiff art colleges lived in New York and Brighton. For forty years Rob worked with highly damaged individuals using poetry and storytelling as an important therapeutic role. Since his retirement in 2012 he has focussed on writing and publishing. A short story The Choice was published in an anthology in 2015. Four short stories published in Ystrad Stories related to the paintings of Ernie Zobole.  He has a novel awaiting publication. His poems have been published in the online magazine I AM NOT A SILENT POET, Bezine and The Learned Pig. A poetry collection “Uncertain Times” was published in 2016. He is currently working with a publisher on a collection of short stories and poetry “Imaginary Beaches”. www.celfypridd.wordpress.com

Suzanne Iuppa. Suzanne is a poet and community worker who lives on a remote, sometimes rainy, sometimes sunny hillside in Southern Snowdonia. Her work appears in many literary magazines from the UK and USA and when she is not writing or eating something; she is chopping firewood.

Sally Spedding Sally was born near Porthcawl and, having won an international short story competition, was approached by an agent. ‘Wringland’ was her first crime chiller, and ‘The Yellowhammer’s Cradle’ her tenth, last year. She is also a much-published, award-winning poet. www.sallyspedding.com

Come join us – relax and take a load off!