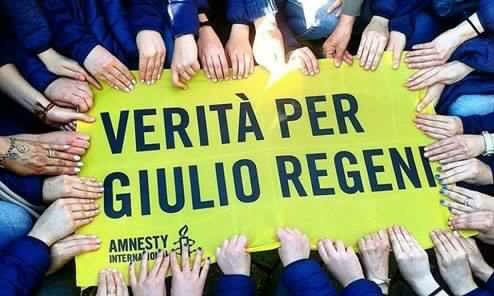 Giulio Regeni her son lies buried under a line of cypress trees.

her son’s gravestone is just a plain marble slab.

unadorned except for flowers, devotional candles and a small photograph

his face open and earnest.

‘It’s all over the happiness of our family was so short.’’

she waits for justice to be done and for truth to be told.

and love will triumph, love for a child will not be out done.

his face open and earnest.

Nagy said – ‘‘We will just have to wait. Inshallah, something will come of it.’’

And the secrecy of darkness enfolds always playing for time,

hoping people will forget, and we and the world will stop watching.

and Giulio Regeni lies buried under a line of cypress trees

his gravestone a plain marble slab.

Giulio Regini’s broken and violated body was left propped up.

Waiting to be found. But they’d found it already

It was in plain view. And they knew, they knew.

A mother honours the child she brought into this world,

the son she loved and watched as any mother would.

A child who grew into manhood with brilliance and compassion,

and the intense inquisitiveness that showed his humanity,

and now Giulio Regeni lies buried under a line of cypress trees.

“But we will not stop until we find an answer. We owe it to his mother.”

my life as a piece of string

storytelling the world through travel & books

The Feel Of Arts

Pick Me Up Poetry

The Magpie at Midnight

Your Health and Wealth Upgrade